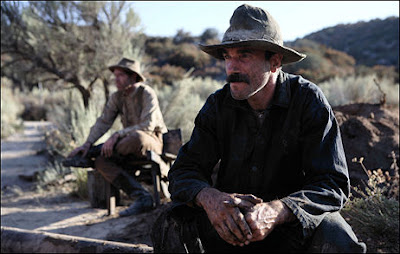 Jonny Greenwood composed the score for Paul Thomas Anderson's latest film There Will Be Blood. Based on Upton's Sinclair novel Oil!, this is a story about family, greed, religion and of course, oil.

Jonny is most commonly known as the guitarist for Radiohead and it seems odd he'd compose an entire film score, especially for a major Hollywood movie. However, he's no neophyte to orchestration as he's done the score for a documentary called Bodysong as well as being commissioned by the BBC to compose a piece call "Popcorn Superheart Receiver".

There Will Be Blood is a brutal, inspiring movie as well as the year's best so far. Jonny's score keeps the film's tone as an abrasive and in-your-face melody, the kind that demands to be heard. Sound is 50% of a movie and you'll no doubt pay attention to the music - whether you like it or not. There will be strings, lots and lots of very loud strings that create a foreboding, haunting presence from beginning to end.

When interviewed together for EW about the score, they replied:

JONNY GREENWOOD: Sometimes Paul would describe the thing as kind of close to the horror-film genre. And we talked about how The Shining had lots of Penderecki and stuff in it. So yeah. I think it was about not necessarily just making period music, which very traditionally you would do. But because they were traditional orchestral sounds, I suppose that's what we hoped was a little unsettling, even though you know all the sounds you're hearing are coming from very old technology. You can just do things with the classical orchestra that do unsettle you, that are sort of slightly wrong, that have some kind of undercurrent that's slightly sinister. Which is what's happening with this film sometimes. Part of what I picked up on and got excited about is that it's the end of the 19th Century. A lot of [things are] just implied, so it's not a horror film in that sense, because people are sort of being polite, but there's a sense of darkness going on at the same time. I love that kind of stuff, when things are unspoken.

PAUL THOMAS ANDERSON: I guess when you have a title like that, the music better be a little bit scary.
Posted by Matt at 8:39 AM