Gods of the Earth 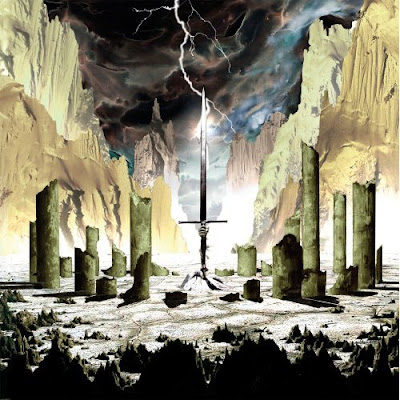 If anything, The Sword has turned up the knob marked “nerd” on its sophomore album Gods of the Earth released today - April fools day.

This isn't a criticism - metal and geek culture continue to cross paths over and over again throughout rock music’s history. It's easy to forget how geeky a lot of the Led Zeppelin songs were - quests of hobbits, dragons, evil forces, etc.

Make no mistake though, Gods of the Earth rocks. Gone is the sludge/stoner/doom/whatever sound of their first album and instead we are treated to a full on thrash assault(think Metallica's Kill 'Em All instead of Black Sabbath's Master of Reality). The riffs are huge, the rhythms are sneaky and brutal, and the pacing is quick. In fact, everything has been turned up, except the vocals, which often get drowned out by the dual guitars.

Song titles include "Fire Lances of the Ancient Hyperzephyrians" and “The Frost-Giant’s Daughter”, which is by no coincidence the title of a Conan story.

As good as their first album? No, but not much is.