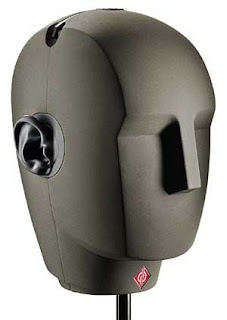 The latest Nine Inch Nails album, "Ghosts I-IV" is a sonic achievement for headphone listening. These 36 tracks are instrumental and most were recorded in a special way: binaurally.

This type of recording uses a simulated head with microphones in the ears. The artist plays the instrument and the recording sounds exactly as what a person would hear in the recording studio. This is a key distinction as studios may be acoustically perfect, however the device(guitar, piano, turntable, etc) is being outputted to a single mic or mixer board. What you get with binaural recording is an amazing 360° degrees of sound, retaining and delivering the space the music was recorded in.

Once recorded, this effect can be reproduced only using headphones. It won't work using loudspeakers, as the acoustics of this arrangement distort the channel separation. Where you stand in the room, the direction of your ears and how close the speakers are all change the sound.

However if you listen through a good set of headphones the result is an awesome listening experience that spatially transcends normally recorded stereo. It accurately reproduces the effect of hearing the exact recorded sound, given the 360° nature of how human ears pick up nuances in sound waves. Binaural recordings can very convincingly reproduce location of sound behind, ahead, above, or wherever else the sound actually came from during recording.
Posted by Matt at 2:04 PM