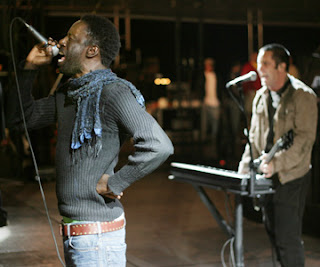 Trent Reznor produced the latest Saul Williams album which is due for release later tonight. Saul Williams, a spoken-word and hip-hop artist will no doubt gain attention as the sound of this record spans many genres: think NIN meets Gnarls Barkley meets Deep Dish. Interestingly enough, you can download his entire album for free, or chip in $5 to support Saul.

A recent interview by New York Magazine have Saul and Trent discussing this release, their feelings towards major record labels and their praise for OiNK:

How did this collaboration come about?
Trent: I'd come across Saul through his "List of Demands" video, and it really impressed me as strong piece of work, as an aggressive rock-type track that jumped out of the television. So I checked to see if he was interested in touring with me. And it impressed me that he could go in front of an audience that probably didn't know who he was. He won the crowd over, and I watched it happen every night. I said, "Hey, if you ever want to experiment on some tracks, let's see what happens."

How would you characterize the music?
Saul: Gosh, I don't know, ghetto gothic? I guess I'd characterize it as hard-core dance. I don't know if I'd include spoken word in it, actually. It's so danceable. I have a lot to say, but I wanted to find a way to say it that didn't get in the way of me dancing my ass off.

Did you ever butt heads?
Trent: There were times when we disagreed on things, certainly, but sooner or later he'd realize that I was right. [They both laugh.]

What inspired you to go the In Rainbows route with this album?
Saul: From the start, I remember Trent saying, "Let's give it away for free." At first, I was like, "This dude is out of his mind!" But then it really started making sense, and, of course, with Radiohead doing it, we were like, "What the fuck? The idea that we had was great, and we should really follow it through."

Trent: I think it's just an awkward time right now to be a musician. The reality is that people think it's okay to steal music. There's a whole generation of people, that's all they've known. I used to buy vinyl. Today, if you do put out a record on a label, traditionally, most people are going to hear it via a leak that happens two weeks — if not two months — before it comes out. There's no real way around that. I'm truly saddened because I think music has been devalued, so that it's just a file on your computer, and it's usually free. But we can't change that. What we can do is try to offer people the best experience that we can provide them. Will it work? I don't know. But I think it's a great way to get music out to people who are interested. At the end of the day, all I care about is the integrity of the music, and that the feeling of those who experience it is as untainted as possible. I'd rather it not be on an iPod commercial. I'd rather it not be a ringtone that you have to get with a free cell phone or any of that bullshit.

Are you using this project, Trent, to test the waters for a self-released NIN record?
Trent: There isn't a Nine Inch Nails record done. I'm starting one right now. If I had one that was done, I would [release] it today in exactly the same way. I won't have one done for several months. One of the things that started this in motion with Saul was me sitting around thinking about finally getting off a major label, which I think is the right move for Nine Inch Nails. I wasn't looking to jump right back into another binding contract with a big company, and I just wanted to make sure that I wasn't advising Saul to do that in today's climate. We decided to go the route we did, and we'll see what happens.

How long do you think before the labels are out of business?
Trent: I mean, who knows? I remember a time when it felt like, being on a major label, our interests were aligned. At times, it's a pretty well-oiled machine and the luxury is that I feel like I've got a team of people who are taking care of the shit I don't want to think about. I don't care about the radio guy, I just want to make music. But those days are gone. Because, mainly, that infrastructure is broken at the moment. How long before [record companies] are irrelevant? Who knows? They seem to be doing everything they can to make sure that happens as quickly as possible.

Saul: I had already had experiences with my first album, with Rick Rubin and Sony and everything, where the company basically sat on it for two years and told me it wasn't hip-hop. So, I was also very familiar with the infrastructure, and this just made the most sense.

What do you think about OiNK being shut down?
Trent: I'll admit I had an account there and frequented it quite often. At the end of the day, what made OiNK a great place was that it was like the world's greatest record store. Pretty much anything you could ever imagine, it was there, and it was there in the format you wanted. If OiNK cost anything, I would certainly have paid, but there isn't the equivalent of that in the retail space right now. iTunes kind of feels like Sam Goody to me. I don't feel cool when I go there. I'm tired of seeing John Mayer's face pop up. I feel like I'm being hustled when I visit there, and I don't think their product is that great. DRM, low bit rate, etc. Amazon has potential, but none of them get around the issue of pre-release leaks. And that's what's such a difficult puzzle at the moment. If your favorite band in the world has a leaked record out, do you listen to it or do you not listen to it? People on those boards, they're grateful for the person that uploaded it — they're the hero. They're not stealing it because they're going to make money off of it; they're stealing it because they love the band. I'm not saying that I think OiNK is morally correct, but I do know that it existed because it filled a void of what people want.

How much did you guys pay for the new Radiohead album?
Saul: I paid $7, which is like, what, fourteen pounds? No, wait, that's like three pounds!

Trent: I bought the physical one, so I spent a whopping $80. [Pauses.] But, then I re-bought it and paid $5,000, because I really felt that I need to support the arts, so people could follow in my footsteps. [Saul laughs.]